Mia Koji (柳生ナスティ Yagyu Nasuti) is a close friend of the Ronin Warriors. Her grandfather collected much data on the evil Dynasty, five elemental armors, and the White Armor of Inferno, which Mia has since inherited and uses whenever the Ronins require her assistance.

Mia is voiced by Lalainia Lindbjerg for the TV series and Maggie Blue O'Hara for the OAVs (Kaori Kusakabe in the original Japanese version).

Mia has auburn hair and dark green eyes. During the TV series, she wears a white blouse under a pink sweater, pink triangular earrings, blue shorts, blue thigh-high stockings, and blue shoes. She wore an orange coat with an orange collar, matching orange pants, boots, and a yellow handband while she was looking for Kento on . During Gaiden, she wears a red backless halter dress with a black bow across her chest, red gloves, and black shoes for Ryo's birthday party. When she goes to New York, she wears a sky blue button down dress with a white collar, a periwinkle belt, sky blue shoes, and a pink ribbon in her hair. The following day, she wears a yellow sweater, khaki pants, coral earrings, white socks, and dark shoes. In Legend of the Inferno Armor, she starts off in a white shirt, blue shorts, and white sneakers, and then changed into the two outfits she wore in New York. In Message, she wears a blue-gray dress, a white jacket with goldenrod trim, a turquoise ascot, gold hoop earrings, and a goldenrod belt.

Mia is a very courageous young woman. Though she is at first skeptical that the legend of the Ronin Warriors is true, she quickly jumps into action when the city is in danger. She is a very focused individual, working hard to assist the Ronins even while dealing with the loss of her grandfather. She becomes of the Ronins' major supporters, offing them encouragement and advice when the situation calls for it, and managing to keep the peace whenever they disagree on something. She enjoys riding around on her bicycle, romance literature, and driving (which might explain how she ended up being the Ronins' personal chaufeaur). She doesn't like secrets.

Mia's family is very well off, seeing as they own two houses within driving distance of the city. She's the daughter of a Japanese father and a French mother. Her late grandfather was a romance literature professor at Sengoku University. Mia got her driver's license when she was seventeen years old, meaning that she must have been living outside of Japan at the time.

The Legend of the InfernoEdit

Cye of the Torrent Edit 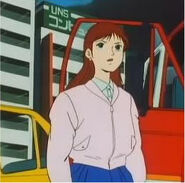 Retrieved from "https://roninwarriors.fandom.com/wiki/Mia?oldid=6412"
Community content is available under CC-BY-SA unless otherwise noted.